Oman eGovernance Framework is a set of standards / best practices and process management systems to enhance the delivery of Government Services in alignment with the Mission of ITA. The framework spells the rules and procedures that ensure that Government IT projects and systems sustain and extend ITA’s strategies and objectives. It is also intended to provide assurance about the value of IT, provide framework for the management of IT-related risks and putting together controls to minimize risks and better deliver IT initiatives.

Oman eGovernance Framework is a set of standards / best practices and process management systems to enhance the delivery of Government Services in alignment with the Mission of ITA. The framework spells the rules and procedures that ensure that Government IT projects and systems sustain and extend ITA’s strategies and objectives. It is also intended to provide assurance about the value of IT, provide framework for the management of IT-related risks and putting together controls to minimize risks and better deliver IT initiatives.
The Oman eGovernment Architecture Framework (OeGAF) serves as a guide to the development, deployment and operations of Information Systems of the Oman Government entities. OeGAF contains the principles, strategies and building blocks that support the goals of the government. The architecture can direct the selection, use and operation of technologies needed to support government business requirements and delivery of services. The architecture can reduce the time and cost of deploying applications, while making it easier to integrate information and services.
OeGAF shall help the Government to act as an “Integrated Enterprise” and manage IT as a strategic investment. 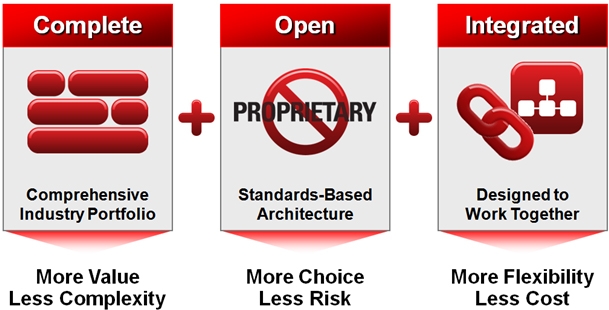 The Open Group Architecture Framework, or TOGAF, is intended to provide a structured approach for organizations seeking to organize and govern their implementation of technology, particularly software technology. In that sense, its objective is to employ an encompassing conceptual framework to try to ensure that software development projects meet business objectives, that they are systematic and that their results are repeatable.
TOGAF was created and is maintained by The Open Group, an independent industry association. It builds on an earlier framework known as TAFIM, or Technical Architecture Framework for Information Management, originally devised by the U.S. Defense Dept. In early 2009, The Open Group released TOGAF version 9. The Open Group and others commonly lead TOGAF certification and educational programs today. Typically, enterprise architects lead use of TOGAF within organizations.

ITIL is a framework for IT service management that strives for predictable, maintainable services that align with the needs of the corporation or organization. The ITIL (Information Technology Infrastructure Library) framework is designed to standardize the selection, planning, delivery and support of IT services to a business. The goal is to improve efficiency and achieve predictable service levels. The ITIL framework enables IT to be a business service partner, rather than just back-end support. ITIL guidelines and best practices align IT actions and expenses to business needs and change them as the business grows or shifts direction.

ITIL encompasses a framework of five core publications or ITIL books, which are periodically reviewed and updated as technologies change. Each book collects best practices for each major phase of the IT service lifecycle. ITIL Service Strategy explains business goals and customer requirements. ITIL Service Design shows how to move strategies into plans that help the business. ITIL Service Transition shows how to introduce services into the environment. ITIL Service Operation explains how to manage the IT services. ITIL Continual Service Improvement helps adopters evaluate and plan large and small improvements to IT services.

The Capability Maturity Model Integration (CMMI) project is a collaborative effort to provide models for achieving product and process improvement. The primary focus of the project is to build tools to support improvement of processes used to develop and sustain systems and products. The output of the CMMI project is a suite of products, which provides an integrated approach across the enterprise for improving processes, while reducing the redundancy, complexity and cost resulting from the use of separate and multiple capability maturity models (CMMs). CMMI is the successor to CMM (Capability Maturity Model). Both CMM and CMMI were developed at the Software Engineering Institute (SEI) at Carnegie Mellon University in Pittsburgh, Pa. CMM was developed in the late 1980s, and retired a decade later when CMMI was developed. CMMI v1.02 was released in 2000.

CMM was developed as a result of a study financed by the U.S. Air Force as a way to objectively evaluate the work of software subcontractors. The Department of Defense, concerned over escalating software development costs and issues with quality, established the SEI in the early 1980s, and work on the CMM began in 1988. It was first described in the 1989 book, Managing the Software Process, by Watts Humphrey, director of the software process program at the SEI, and in August 1991 the first version of the Capability Maturity Model for Software (SW-CMM) was published by the SEI.
The CMM was originally intended to be a tool to evaluate the ability of government contractors to perform a contracted software project. Though it was designed to measure software development, it has been, and continues to be, applied as a general model of the maturity of processes in both IT and non-IT organizations.

There are key process areas (KPAs) within each of these maturity levels that characterize that level, and five measures for each KPA:
1. Goals
2. Commitment
3. Ability
4. Measurement
5. Verification
Companies were expected to be formally assessed as to their maturity level. As they achieved each level, they formed a plan to get to the next. However, the rigorous processes required precluded the advancement of many commercial software companies beyond level 1.

Risk-Based Approach
The risk-based approach to security control selection and specification considers effectiveness, efficiency, and constraints due to applicable laws, directives, Executive Orders, policies, standards, or regulations. The following activities related to managing organizational risk (also known as the Risk Management Framework) are paramount to an effective information security program and can be applied to both new and legacy information systems within the context of the system development life cycle and the Federal Enterprise Architecture:

Step 3: Implement
Implement the security controls and document how the controls are deployed within the information system and environment of operation.

Step 4: Assess
Assess the security controls using appropriate procedures to determine the extent to which the controls are implemented correctly, operating as intended, and producing the desired outcome with respect to meeting the security requirements for the system (3).

Step 6: Monitor
Monitor and assess selected security controls in the information system on an ongoing basis including assessing security control effectiveness, documenting changes to the system or environment of operation, conducting security impact analyses of the associated changes, and reporting the security state of the system to appropriate organizational officials .

The Business Model for Information Security, provides an in-depth explanation to a holistic business model which examines security issues from a systems perspective. Explore various media, including journal articles, webcasts and podcasts, to delve into the Business Model for Information Security and to learn more about how to have success in the IS field in today's market.